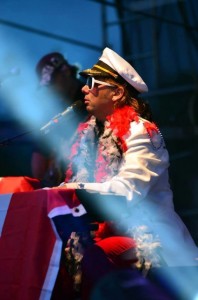 Les puts on an inspired and entertaining Elton John performance. Captain Fantastic is based on the 70’s and 80’s era of Elton John’s work including a five piece band and three costume changes.

Les has been traveling all over North America doing shows for the past 10 years performing at festivals, fairs, corporate functions and other venues.

An engaging show that features the amazing music of Elton John, performed with enthusiasm and integrity. Don’t miss the chance to see this sensational show!

What people are saying about Captain Fantastic

“The tribute was awesome”

“You sounded just like him. I sang along to all of the songs!”

“I couldn’t get over how much he sounded like Elton. Great costumes! Great show!”